The Tale of Two Cultures

WeChat has been crowned by the West as the Chinese ‘super app’. It is China’s most dominant and important social networking ecosystem of 1.1 billion monthly active users—an extraordinary multi-purpose all-in-one social network ecosystem that combines the personal, professional, business spheres with lifestyle and payment features. In this article, we focus on the non-monetary features of WeChat and decode four of them to highlight what makes Chinese culture distinctively different from the West. We elaborate on cultural traits that are concrete and tangible characteristics of social behaviours—such as the way Chinese conduct interpersonal relations and do business.

In contrast, the West prefers to distinguish what is personal from professional, and private from the public. Facebook and Instagram fall into the former categories, while Twitter and LinkedIn serve more of the latter functions. This is reflective of the way Westerners think and work. They do so in a partial way by analysing systems separately, with rationality and clear boundaries as the basis for working well together.

Western social network platforms operate with different logic because Western culture is more about openly interacting and sharing. It tends towards slightly less investment in each personal relationship. Greater importance is placed on the extensiveness of one’s social network and receiving support and recognition from the relevant social circles. Facebook, Instagram and LinkedIn freely show who and how many have engaged with your post even if they are more than third-degree connections. Furthermore, these platforms all have a dedicated ‘people you may know’ or ‘who to follow’ section to let users proactively expand one’s social network. The Western approach to networking involves fewer moral obligations and emotional ties. As such, making new connections can be reduced to the click of a button.

When it does come to making new connections, the Chinese are relatively more reserved and self-contained. This is because collectivism and group harmony are favoured. With unfamiliar connections, the Chinese prefer to hold back their individual opinions and feelings. Only in a safe and trusted social circle will the Chinese be comfortable in expressing their thoughts more freely. WeChat supports this social norm of refrain by protecting users’ privacy—not indicating of users’ online status or receipt of having read the messages. Another important cultural trait is the norm of saving one’s face or not losing face. If the read receipt is shown and one does not reply, it is highly embarrassing and one risks ruining the relationship.

On the other hand, Western culture is largely individualistic and control-oriented. Westerners are much more social from the outset of meeting new people. They generally enjoy an open exchange and do not have the same concept of saving face. Social networking and messaging platforms on Facebook, LinkedIn, Twitter, Instagram and WhatsApp automatically provide the online status and read receipts function to facilitate and optimise conversations. The mentality of Westerners is much more focused on transparency and productivity. Any abrasions or offences in social interactions are seen as minor and quickly brushed away. As such, they do not mind being explicit and direct, with no need to hide, on social network platforms.

There is a strong consciousness that the group administrators on WeChat have an implicit leadership status and assume some form of responsibility for the dynamics of the group. This is strongly connected to the Chinese hierarchical culture of respect to a senior, boss and leader.

This hierarchical consciousness is less present in Western social network and messaging platforms, such as WhatsApp and Facebook Messenger. For most casual groups created, there is no implicit hierarchy and leadership. Group administrators have a functional role and everyone in the group is seen to be equal.

Social network ecosystems are reflective of society, culture and users’ habits. It serves as a communication channel and increasingly a marketplace for people to exchange, interact and carry out their daily activities. It is no surprise that the design of social network features is tightly linked with concrete cultural traits and how social interactions are experienced and made. We have demonstrated how cultural differences can be can differentiate through social phenomena. WeChat has been very successful in China because it was designed according to the way Chinese conduct their interactions and way of living, just like Western apps were too. 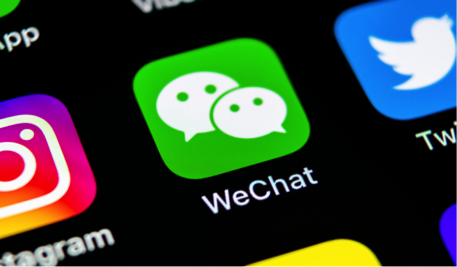